I have been quiet for a while writing for some other projects rather than myself.  I hate to start back negative, but I feel life on a vacation island along with a political climate that only sees the oceans as potential oil fields has struck a nerve.  I challenge you to stand outside a grocery and spot a single visitor using re-usable bags as they load up for the week on Saturday.  I look disgustedly at the number of city trucks headed to the landfill at the end of a weekend loaded with abandoned boogie boards and beach chairs. Plastic straws on the individual level?  A battle might be asking members of our choir to just stop sucking, but the war is far larger.

I was heading to the water this morning and watched someone walk out of one of the large beach rental, single family homes on Beach Avenue carrying a bag of trash. The “Visitor” proceeded to take the trash to one of the public trashcans next to my car on the beach access path and

throw it in. He then smiles and says good morning. Well since you brought it up, No, it’s not.  I politely asked if that was his trash and if he was staying in that house.  Following two yes answers I then asked why he did not put it in private cans at the house.  His answer, “I pay $20,000 and I come here for one week. I will put it wherever I want.” I pointed out that when these cans are filled beach goers leave their trash outside the cans that then ends up in the oceans and the dunes. His response, “It’s only this much (Holding his hands a couple feet apart) and this won’t 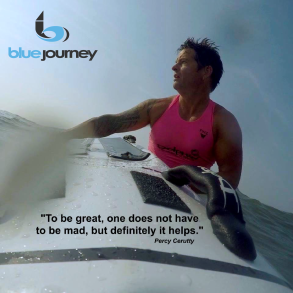 fill up the cans.  There was no name calling or cursing beyond calling his behavior disrespectful and parasitic to those who call this home and value the LONG term health of our island.  I then encouraged him to take his $20,000 elsewhere.  This is our home every week, and if he can not take the most minimal of steps to respect our home we will continue to encourage him to find somewhere else to go where he can’t do as much damage. This entitlement mentality
is rampant. If my fellow ocean focused peers aren’t planning beyond a hashtag campaign for “Likes” while also measuring program effectiveness for sustainable positive behavioral change then they are just a momentary, warm and fuzzy distraction. Fight to win the battles. Know your role in the war. #oceanpositive #bluejourney

Bruckner Chase is a professional endurance waterman and ocean advocate whose 2010 25-mile swim across Monterey Bay launched both the BLUE Ocean Film Festival and his own career committed to moving others from awareness to personal, sustainable action that benefits our oceans and our communities. A recently launched 5-year collaboration with NOAA’s National Weather Service will work to build a new outreach model for protecting our communities and our oceans. Using Evidence Based Ocean Engagements his personal and corporate mission is: To positively impact how we feel, think and act towards our oceans. Bruckner’s athletic career spans the most challenging events on water and land. He competed as a professional triathlete, and he continues to be an elite level competitor in every endurance sport he takes on. On the water Bruckner has completed multiple ultra-distance swims and paddles in some of the harshest conditions imaginable: a record setting no wetsuit swim in Alaska, a 22-mile swim of Lake Tahoe and historic swims between the islands of American Samoa. Bruckner competes in professional surf lifesaving sports across multiple aquatic disciplines. He is the fifth American in history to compete in the iconic Coolangatta Gold Surf Iron Man in Australia, and in 2016 he became the only American to finish the event three times and the first to earn a spot on the winners podium. Bruckner’s athletic pursuits are a means to connect others to our aquatic world. As a coach, speaker and writer he inspires others and creates opportunities for them to discover their own connection to the oceans. He has created innovative youth programs in American Samoa, and was given a Matai (Chief) title in the village of Aunu’u. His innovative Unified Team trains those with spinal injuries as prone paddlers and swimmers in the open water. Through their foundation he and his wife, Dr. Michelle Evans-Chase, work with groups such as: National Weather Service, Seafood Watch, Ocean Today, National Marine Sanctuaries, BLUE MIND, Government of American Samoa and Bacharach Rehabilitation Hospital. Bruckner continues to build healthier oceans and communities with a commitment to enable in others the Passion to Care, Strength to Act and Vision to Inspire.
Loading Comments...
%d bloggers like this: